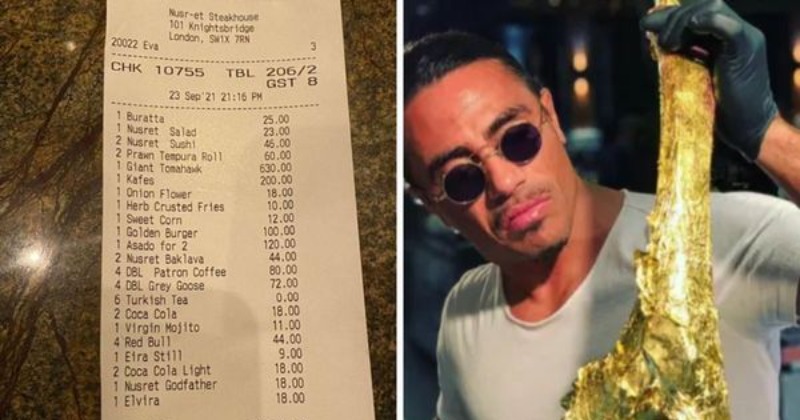 Popular chef Salt Bae or Nusret GÃ¶kÃ§e is often seen cutting meat or serving food in some of his chic restaurants for Hollywood actors, famous footballers, and other celebrities.

The Turkish culinary artist became an internet sensation a few years ago after his unique technique of preparing and seasoning meat became an internet meme. He now spends all of his time in his many chic restaurants that host famous celebrities and politicians.

However, the famous chef has added a new restaurant to the long list of restaurants he already owns. He opened â€œNusr-Et Steakhouse Londonâ€ in the United Kingdom, located in the Knightsbridge district of central London. The new outlet caught the attention of foodies who flocked to the restaurant to try the exquisite cuisine.

However, the seemingly glamorous fine-dining restaurant was called out by Twitter users after a bill from the restaurant surfaced online. The invoice lists 22 different items that were ordered from the restaurant. The cheapest item was Â£ 9 and Turkish tea was free. But what has left internet users confused is the price of items like fries, giant Tomahawk steak, burger, shrimp tempura rolls.

A single restaurant meal set customers back 1,800 pounds or around Rs. 1.80 lakh.

Twitter users were shocked to see the high prices on the bill and took her to social media to talk about it.

Honestly, this must be a wake-up call. Absolutely ridiculous spending that kind of money on a meal it’s just obscene. You’re clearly being ripped off, it’s there in black and white to see, No cut of beef is worth Â£ 630, You’ve been charged Â£ 11 for a can of Red Bull. FFS

Â£ 9 for a Coke implies that you are going to fight them over discretionary service charges. Â£ 10.35 for a coke.

Nine pounds for a coke?

These service fees alone represent 3 weeks of shopping for a family.

Interestingly, this isn’t the first restaurant in Salt Bae to be criticized for its excessive costs. Earlier this year, Miami’s Nusr-Et restaurant was also criticized by many for its overpriced food.

Well, it can cost us a kidney for sure.

EXCLUSIVE: Preview of new single from Tyler Shaw and The Tenors – Video