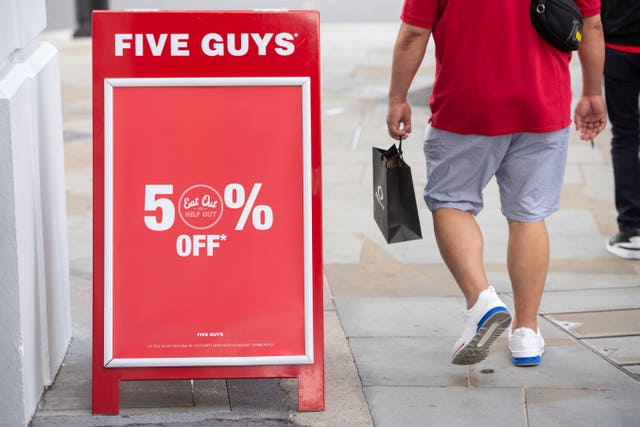 Restaurants and pubs reported a slight drop in sales in the second week of the Eat Out to Help Out scheme, new figures show.

Sales collectively fell 13% between Monday August 10 and Wednesday August 12 compared to the same period a week earlier, according to research by hotel software company Fourth.

He said “quick-service restaurants” saw sales drop 30% in the second week, while sales at other restaurants fell 6%.

Meanwhile, sales in pubs and bars were down 20% from the previous week.

Fourth also said the majority of businesses using the program reported sales figures that included the Eat Out to Help Out discount and therefore underestimated their total revenue.

The data, which analyzed more than 700 companies in the sector, revealed that sales increased by 50% between Monday August 3 and Wednesday August 5, compared to the previous week, underlining a good start for the initiative.

He said this showed a 70% increase in sales for restaurants, while pubs and quick service restaurants increased by 26% and 22% respectively.

Fourth added that the initial data “does not indicate a drop in trading between Thursday and Sunday” compared to the previous week, when supply would impact other trading days.

For the second week of the initiative, operators also increased their workforce to meet the increased demand, reporting a 4% increase in hours worked by staff compared to the previous week.

Sébastien Sepierre, Managing Director for Europe, Middle East and Africa at Fourth, said: “With the uncertainty surrounding consumer demand in the first week of the initiative, and some employees still in leave, operators were naturally cautious in managing their workforce.

“However, following the positive spike in trading in the first week, there has been an increase in expected hours in the industry, which will in turn have a positive impact on the overall customer experience, which which is crucial to ensure the initiative generates a lasting positive impact for the industry.