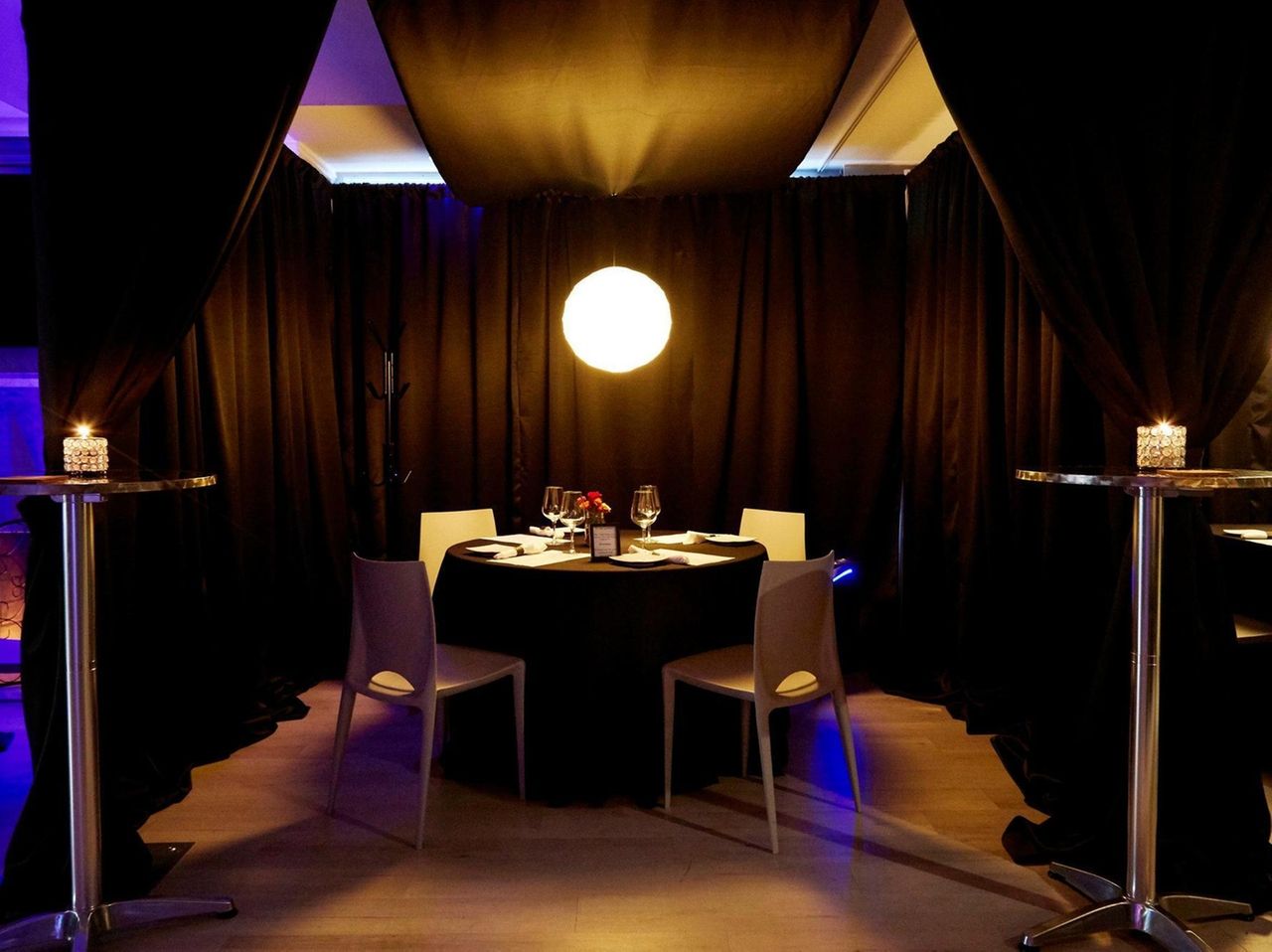 Alan Feinstein wasn’t expecting much when, late last year, he turned his Port Washington eating spot, H on the Harbor, into a restaurant. “We were opening a new restaurant in an isolated location in the midst of a pandemic,” he recalls. “Does that sound like a good idea?”

Apparently it is. It is only open on Friday and Saturday evenings but, since December, it has been busy, especially with recurring business. “We have people who make reservations as soon as they’re done with dinner,” he said. “A couple has a standing table every week.”

The sleek, modern space, which once hosted 160 guests, now hosts 10 private “cabins,” each surrounded by heavy curtains hanging from the ceiling and equipped with its own air purifier with HEPA filter and UV light. The restaurant seats 36 people at a time, and each hut is sprayed between parties.

Dining here for the second time in late February, Ermo Bonavitacola of Port Washington said “this is my safe space. Before coming for the first time, I hadn’t been out to eat since March. I was petrified, I told my family, ‘if I don’t feel safe, we’ll turn around.'”

Feinstein said social media and word of mouth drew customers to its Main Street location, about a mile west of downtown Port Washington. His zeal to provide a safe environment for COVID is rooted in his own experience. Currently in remission from cancer, the 65-year-old, who is immunocompromised, says he does nothing more than “create an environment where I feel safe”.

Like the entire restaurant industry, H on the Harbor shut down completely in March 2020. In May, Feinstein and Executive Chef Dan Carey “hopped on the bandwagon” with takeout, offering meals at take out for Mother’s Day, Memorial Day and Father’s Day. It turned out to be a no-start: “It wasn’t profitable,” he said. “We’re not set up to make pasta platters.”

In early November, Carey said “why don’t we do a restaurant here?” Initially, Feinstein objected. Prior to buying H on the Harbor in 2006, he had spent decades in the hospitality industry – food and beverage director at Fairmont Hotels, food and beverage director at Ritz Carlton, vice president and general manager of Carlyle on the Green ( now Heritage Club in Bethpage) in Farmingdale – and he had avoided the restaurant business which was seen as more temperamental and uncertain.

Now the roles were reversed. Even more surprising than the success of the idea was how much Feinstein came to enjoy this career-ending challenge. “My family told me I was crazy,” he recalls, “but it keeps me creative, and that really helped me last year.”

Once he and Carey came up with the idea for draped cabanas, their imaginations ran wild. Each has its own character: an intimate shed for two with a fireplace, a friendly shed for four with its own video screen. The largest cabana, sleeping up to 10 people, is only partially draped as it occupies the front of the restaurant, with its west-facing window overlooking (across the street) the bay from Manhasset. Diners can adjust the lighting in their own cabana and, for reading menus in dim light, there are tiny gooseneck reading lamps hidden in the flower arrangements.

Compared to the dining room, the kitchen needed very little remodeling. “Even though we’re a caterer, we don’t own any stoves,” Feinstein said. “We had always served restaurant style.” It’s selling short: H on the Harbor’s veneers are some of the most creative I’ve seen. On the evening of my visit, a seared cast-iron filet mignon was served under a glass dome into which hickory smoke had been pumped; smoke rose from it when it was ceremonially removed. A grilled cheese sandwich-inspired cheese wonton entrée was accompanied by smoked tomato bisque served in a repurposed Campbell’s soup container.

Food is transported to the table on a butcher block cart lit by tiny pin lights for better Instagram results. Ever the showman, Feinstein will offer to reheat a chilled chop with a handheld butane torch. A dish topped with lemons comes with a lemon squeezer “so people don’t mess up their manicures.”

On January 29, the state announced that caterers could reopen if they limit their capacity to 50%. For now, Feinstein is sticking to the restaurant. “For a guy like me,” he said, “to reopen as a caterer is 75 people and a lot of headaches.”

State guidelines for “in-person and catered events” span four pages and require the caterer to notify the county health department of any event with more than 50 people, to collect contact information for each invited, to ensure that all guests have received a negative COVID test result, to ensure that guests sit in their assigned seats and only dance with members of their household – and at least six feet from the other dance centers. Plus dozens of other regulations.

With the exception of a few parties held in May and June that were booked last year, Feinstein said, “until we can host parties of 140, 150 people, we’re going to operate like a restaurant.” Even after the end of the pandemic, he plans to perpetuate the pivot. His latest idea: find a second place to eat and make H on the Harbor 100% restaurant.