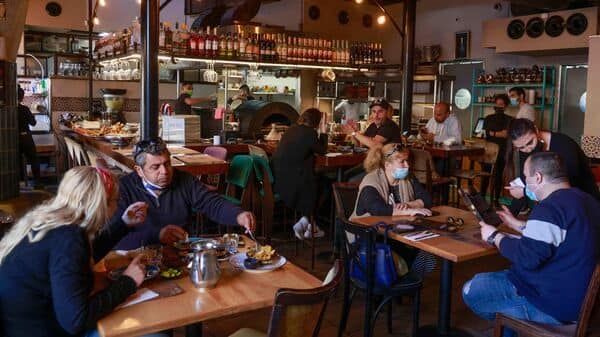 As the debate centers on the legality of service charges levied by restaurants and hotels, with the Department of Consumer Affairs taking charge of revising a robust framework to ensure strict compliance by stakeholders, netizens have turned to Twitter to share how they really feel. on the service that reaches millions of consumers daily.

While some called it an “underhanded practice” or “ridiculous,” others weighed in on paying workers a decent minimum wage. Here are some of the answers:

Young Malala, my youngest daughter and sister to Mojo and Messi the cat, loves life despite losing her parents (and one of her legs) in a horrific train accident recently. pic.twitter.com/ngDEDAc8oy

How about each restaurant adding a service charge to the bill, when it’s not mandatory, then an additional CGST and SGST is charged with a service charge of 9% each! It’s illegal and ridiculous! The service charge is not a
legally binding tax implication on the
customer! Hope, ppl r aware?!

Restaurants can charge more and pay their employees better. Get rid of nonsensical “advice business”. If the customer is satisfied with the service, he will come back anyway, which will be good for the employee.

Notably, the Department of Consumer Affairs, Food and Public Distribution said in a statement Thursday, “As this affects millions of consumers daily, the Department will soon provide a robust framework to ensure strict compliance by stakeholders. “

In a meeting on Thursday, the top issues raised by consumers on DoCA’s National Consumer Hotline regarding service fees such as the mandatory levying of service fees, the addition of default fees without the express consumer consent, deleting that such charges are optional and voluntary and embarrassing consumers if they resist paying such charges, etc. were discussed. In addition, the Fair Business Practices Guidelines Related to Service Charge Charging by Hotels and Restaurants dated April 21, 2017 issued by the DoCA were also referenced, according to the release.

Meanwhile, the United Restaurant Associations argued that “where a service charge is mentioned on the menu, it implies an implied consent of the consumer to pay the charge”. Service fees are used by restaurants and hotels to pay staff and workers and are not charged for the experience or food served to consumers by the restaurant/hotel.

Consumer organizations have pointed out that charging service fees is patently arbitrary and constitutes an unfair and restrictive business practice under consumer protection law. Questioning the legitimacy of such a charge, it was pointed out that since there is no ban on restaurants, hotels on setting their food prices, including an additional charge on behalf service charges is detrimental to consumer rights.

According to a directive issued by the Ministry of Consumer Affairs in April 2017, the fact of placing an order by a customer is equivalent to his agreement to pay the menu prices as well as the applicable taxes. Charging anything other than the above, without the express consent of the consumer, would amount to an unfair trade practice under the law, the department said.

Furthermore, treating a customer’s entry into a restaurant, hotel as implied consent to pay a service charge would amount to imposing an undue cost on the customer as a precondition to placing an order for food and would fall under the a restrictive business practice under the Act, he said.

* Thank you for subscribing to our newsletter.