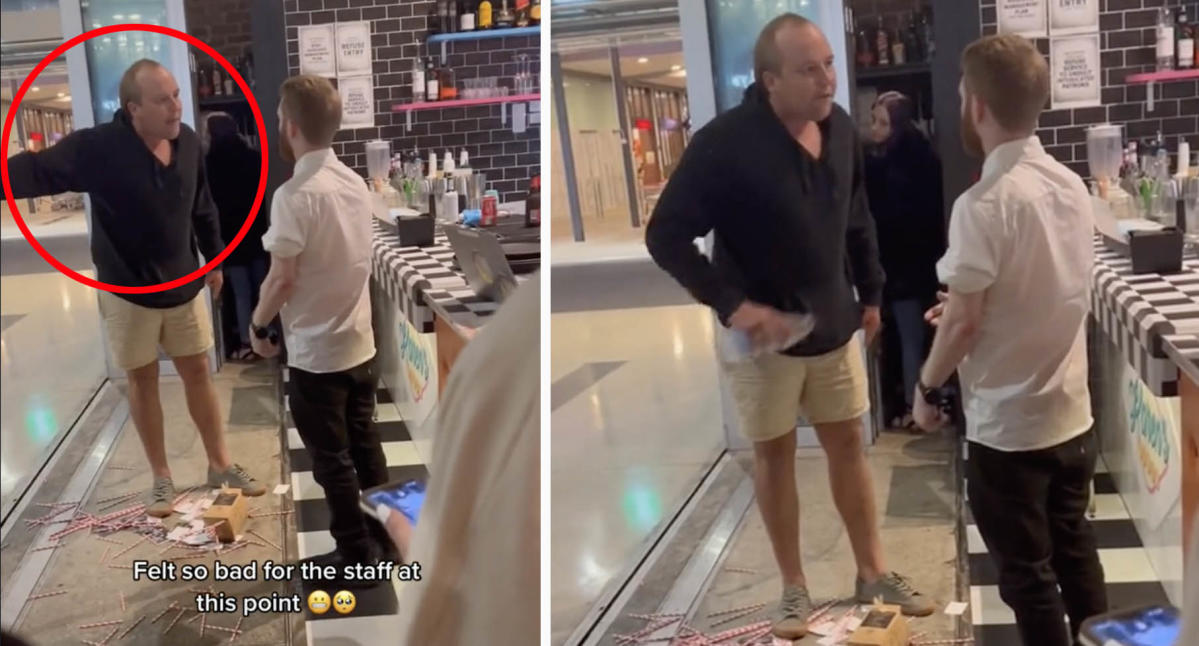 A customer’s heated clash with restaurant staff has split the internet after a video of the Australian restaurant’s standoff went viral.

The war of words was filmed by TikToker Bec Hardgrave who had gone to Karen’s Diner in Brisbane with her friends.

“At Karen’s, you will be greeted and served by rude waiters and forced to play a variety of games,” the website states.

“Karen’s Diner is a place where you can complain until the cows come home because we literally don’t care.”

While Ms Hardgrave said she understood the concept of Karen’s Diner, she insists staff went too far when an employee mocked a male customer’s hair.

“The food was ok but listen to this, they told this guy he was balding and he did.”

Ms Hardgrave’s video shows a red-faced man standing in front of a male employee with piles of straw and towels strewn on the floor.

“What the fuck does your sign say,” the angry customer can be heard shouting at the staff member.

As he points at the sign, indeterminate screams can be heard in the background.

Online, Karen’s Diner has lost rules that clearly state “no racist, sexist, homophobic, and ableist comments” and “no body shaming.”

But Mrs Hardgrave says that was far from the case.

“They were making offensive comments about people’s appearance,” the Queensland woman told her TikTik followers.

“They told my friend she had to brush her hair, how naughty.

“They told my other friend she was too old and threw mugs at us.

“I know they’re paid to be mean to you, but it was a little hectic. Safe to say I probably won’t be back.”

With such an unusual dining experience, the internet was split on who was right or wrong.

“You should all be aware of the risks before entering,” one person wrote online. “If you’re too soft, don’t eat there.”

“Do people not understand the concept of this place?” another argued. “If you’re going to be offended and angry, don’t go. Simple.”

But the majority of users were quick to defend the furious customer who had been insulted because of his hairline.

“The original concept of Karen’s Diner was fun (innocent jokes like swear words etc),” one person wrote online, “so customers don’t expect direct insults when they go there.”

“I went there with my family and at the gate they told us the rules but then they started breaking them themselves,” someone else said.

“This restaurant is a MESS,” added another. “It’s not even about being a Karen, it’s literally bullying.”

Yahoo News Australia has contacted Karen’s Diner for a response, but has yet to receive a response.

Do you have a tip for the story? E-mail: [email protected].