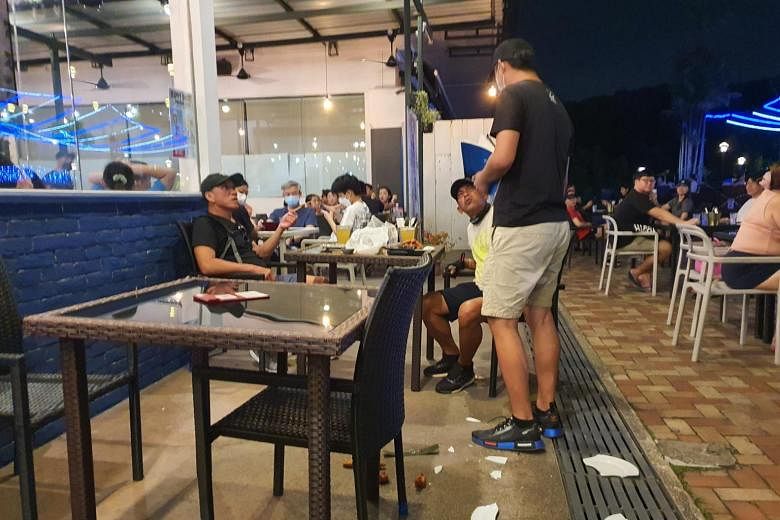 2 men under investigation after being filmed shouting, pushing staff at Punggol restaurant

SINGAPORE — Two men reportedly jumped the queue at a restaurant in Punggol and threw a plate on the floor when staff told them they could not consume food from elsewhere.

The couple, aged 55 and 59, are now under investigation for breaching public order, police said on Tuesday (March 15).

Police said they received a call for help at around 8.25pm ​​last Saturday at a restaurant on Tebing Lane in Punggol, where two men were seen behaving unruly towards serving staff.

Officers from the Ang Mo Kio Police Division were able to establish the identity of the duo through restaurant inquiries and CCTV footage.

In a video shared on social media, the pair can be seen screaming and pushing staff at Fat Po restaurant in Punggol Container Park as staff picked up pieces of a broken plate from the floor.

One of the men confronts an employee and is seen aggressively marching towards the worker.

A voice, believed to be from another customer, can be heard yelling at the man to stop harassing staff.

According to eyewitness account, the couple ignored a queue of customers at the restaurant and sat down at a table before being picked up by staff.

One of the men allegedly started smoking and was told by staff that it was not allowed on the premises.

The eyewitness said the man left but later returned with food, believed to have been purchased elsewhere.

When Fat Po staff told them they couldn’t bring in food bought elsewhere, the men shouted and threw a plate on the floor.

On Sunday, the restaurant posted a message on its Facebook page thanking customers and other members of the public who had come to the aid of its staff.

The message read: “You can break our plates but you won’t break our minds.”

If found guilty of public nuisance, both men could be jailed for up to three months, fined up to $2,000, or both.